You are here: Home › Hogarth’s London
By Cartoonists Club on October 21, 2014 in Cartooning News 0

“Other pictures we look at – his prints we read” – Charles Lamb, on the genius of Hogarth. 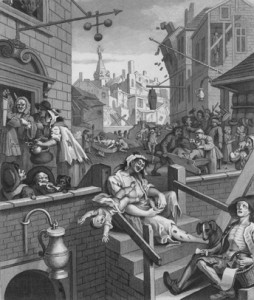 William Hogarth (1697-1764), one of the great chroniclers of London, captured the highs and especially the lows of life in London in his paintings and engravings. His acute observations of the human condition were played out on the streets where he was born, lived, worked and died, and have placed an indelible stamp on the way we imagine Georgian London. Although he rose to become Serjeant Painter to the King, he was never fully accepted by the London art establishment.

This exhibition of fifty of the artist’s best-known London satirical prints marks the 250th anniversary of his death. Hogarth’s cautionary tales of eighteenth-century London’s “modern moral subjects” as he called them, include A Harlot’s Progress, A Rake’s Progress, The Four Times of Day, Industry and Idleness and, of course, Gin Lane and Beer Street. His dynamic narratives tell stories of contemporary London types who would have been immediately recognisable to audiences of the time.

Hogarth’s topographical view of London was quite narrow – Smithfield, Covent Garden, St. Martin’s Lane, and Leicester Fields (now Leicester Square) – but within that small compass teemed a rich and intense variety of life and character. Certain places he creatively re-imagined, other settings have long been wiped from the map, but enough remains to help us navigate our way through his prints.

In the 250 years since he died, Hogarth’s commentaries on London have inspired numerous artists to look at life in London in their own time. Though neither a cartoonist nor strictly a caricaturist, his satires remain a touchstone for satirists from David Low and Ralph Steadman to Steve Bell and Martin Rowson. This exhibition invites the public to look more closely at the original pictures and discover a London which is sometimes horrifying, but always fascinating.

This exhibition is supported by the William Hogarth Trust, and is accompanied by a series talks and events.

Monsters & Other Stories
The Beano has arrived at St Pancras International