You are here: Home › Donald McGill – The Picasso of The Pier
By Cartoonists Club on October 10, 2014 in Cartooning News 1 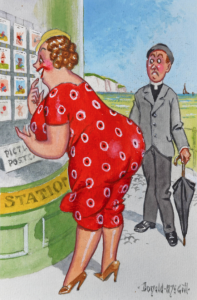 “The King of Comic Postcards  the Picasso of the pier” (Dennis Potter).

This exhibition comprises over 100 hilarious and rumbustious cartoons by Donald McGill, the master of the saucy seaside postcard. For over six decades, his 12,000 designs provided an essential element of the British holiday, and celebrated social life at its most unbuttoned. However, the bulging bodies and revealing costumes, the innuendos and double-entendres, eventually proved too much for the censors, and in 1954, McGill and his publisher were prosecuted under the Obscene Publications Act, and thousands of their postcards had to be destroyed.

However, McGill’s images live on in the national memory as a great popular art. As a result, a museum and archive devoted to the artist and his work opened at Ryde, on the Isle of Wight, in 2010. And, though the museum has now closed, the original artworks in its possession are available for sale through Chris Beetles  a must for collectors of cartoons and illustrations. The accompanying catalogue is fully illustrated, and contains an essay by James Bissell-Thomas, founder and curator of the Donald McGill Museum, on its rise and fall.

In addition to the exhibition and catalogue, Chris Beetles is pleased to launch Bernard Crossley’s Donald McGill: Postcard Artist, the first comprehensive biography of this extraordinary subject.

Of Donald McGill, George Orwell once said: “The special value of his post cards is that they are so completely typical”

How Do You Do That Then? – Vanishing Point
Monsters & Other Stories

One Response to Donald McGill – The Picasso of The Pier